The Punjabi word “Bein” or “Vein” seems to be derived from Sanskrit “Veni” which, as per Punjabi-Hindi Kosh, means  “a water body,” or “a particular stream.” V. S. Apte in The Practical Sanskrit-English Dictionary defines“Veni” as “continuous flow, current, stream”

The word “Triveni”, which is commonly means “confluence of three rivers,” as is the case with Prayag where  Ganga,  Jamuna and Saraswati are said to join, also takes the root “veni” to mean “river” or “stream”. Some rivers and streams in India have also been named as “Veni” (“Vein”) or “Bein”.   For example one of the rivers which joins the holy confluence of seven rivers Saraswathi, Siva, Badra, Surabhi and Bhogavathi, Krishna, etc. near the place of Kurupura in the South India, is called “Veni”. This “Veni” River is also mentioned in Canto 5 of S'rîmad Bhâgavatam. Similarly, the Ravi has a tributary in J.& K., which is known as “Bein”.

The word “Veni” has another meaning also. According to V. Shrivastava (Hindi Rashtra Bhasha Kosh), it means “women's braided tress of hair.” Ram Chand Verma (Pramanik Hindi Kosh) has also defined the word “Veni” in terms of “braided tress of women's hair.”  The word is commonly used in this sense in many modern Indian languages including some Dravidian languages like Kannada. In Andhra Pradesh and Karnataka, the word  “Veni” is used to qualify a special kind of folk dance called “Jada Kolatam” or “Veni Kolatam”, where ropes and intricate movements of the dancers are used indicating its associations with “braided hair”. 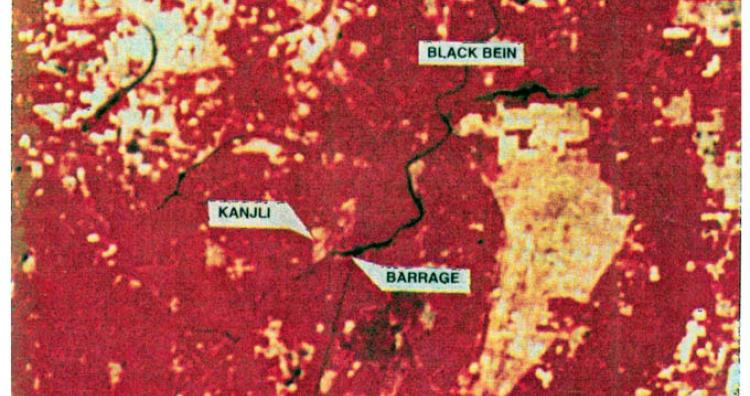 Geographical location of the Kali Bein on the world map is as follows:

The Kali Bein rises from Terkiana marshland in Tehsil Mukerian of Hoshiarpur district. It is named as “Kali” because the hue of its water is blackish. It is not directly an ice-water stream. The water that oozes out in district Hoshiarpur flows in it. In ancient times, Kali Bein was directly linked to the Beas. 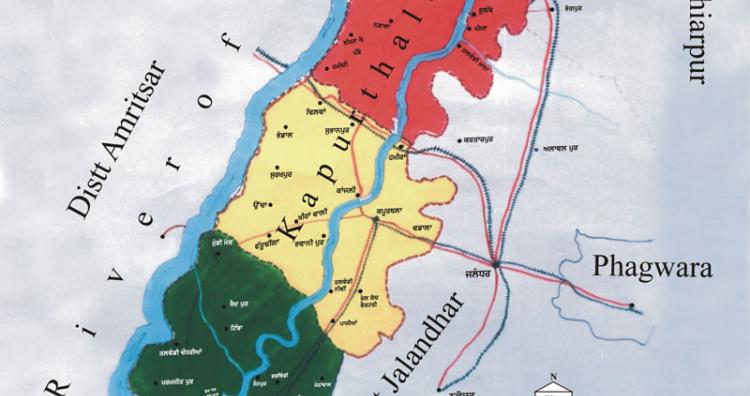 But with the passage of time the Beas River changed its course and retired by a few hundred metres away from the place of Bein's origin. Since then the Kali Bein has been taking its water from waterlogged areas and marshes of Terkiana near the Beas.  Here small quantities of underground water ooze out at various places such as Dhanoa, Himmatpura, Vadhaia, Shatabkot, Terkiana, etc, move downwards in narrow waterways  and join together to form a small brook in marshland of Terkiana.Beginning its journey from Terkiana marshland in Mukerian Tehsil of Hoshiarpur, Kali Bein, thus, moves in southwestern direction recoiling like a snake.

The villages and towns which are situated on its banks are as follows:

(A) Villages and towns of Distt.Hoshiarpur:

(B) Villages and towns of Distt.Kapurthala:

Like White Bein or Western Bein, which rises from Saila Khurd near Garh Shankar in distt. Nawanshahar and passes through district Jalandhar to mingle with Sutlej, a few k.m.s upward from Harike Pattan, the Kali Bein also had been called “the life-line” of Doaba, the central region of Punjab. Life of people here depends mainly on these Beins. The Kali Bein drains out the excess water of waterlogged Bet area of Mukerian and Dasuya Tehsils in Hoshiarpur district and brings it to a large area of Kapurthala district where it is much needed for the recharging of water table. In times of flood, the Kali Bein comes to rescue of the lives and property of the people, especially in Kapurthala district, by draining out the floodwater. Kali Bein is thus economically very crucial for the life of Doaba area, where more than 80 % of people depend on agriculture.

Kali Bein is also historically very significant. At Sultanpur Lodhi, more than five hundred years ago, it became the site for first emergence of Gurabani. Guru Nanak Dev Ji, the great Guru of humanity, came to stay at Sultanpur Lodhi where his elder sister Bebe Nanaki was married to Jai Ram, a revenue officer of Daulat Khan Lodhi who was the Nawab of Sultanpur Lodhi. Guru Nanak was given the job of Modi at the Modikhana (grocery) of the Nawab. But more inclined towards meditation of God than mundane duties, Guru Nanak liberally distributed grains among poor people, uttering “Terah..Terah” meaning both “Thirteen” and “O God, I'm yours.”  One day he went to take his daily bath at Kali Bein at the place where now stands Gurdwara Ber Sahib, and disappeared into the water for some days. He however came out of water on the third day at the place where now stands the Gurdwara Sant Ghat and uttered the Mool Mantra of Gurbani:

One Universal God, True Name, Creator, All-Pervading, No Fear, No Animosity, Timeless Being, Beyond birth, Self Existent, By the Guru's Grace.

This idea of Oneness of God breathed a fresh air into the Indian religious tradition and stood for ideals of liberty, equality, and fraternity embracing whole humanity. Thus a new humanistic philosophy was born on the banks of Kali Bein at Sultanpur Lodhi. In this sense, it becomes the first pilgrimage for followers of Guru Nanak and believers in his philosophy.

Apart from its religio-philosophical significance, Kali Bein is also closely linked to the religious and cultural life of the Doaba region. Many historical gurdwaras are situated on the banks of Kali Bein, such as Gurdwara Pul Pukhta (related to the Sixth Guru Shri Hargobind Ji), Gurdwara Sant Ghat (the site of Guru Nanak Dev Ji's enlightenment), Gurdwara Ber Sahib (the place where Guru Nanak Dev Ji used to take daily bath and where he planted a Ber tree which is still there), Gurdwara Rababsar at Bharoana (from where Guru Ji's companion Mardana got his historical rabab to accompany with Guru Nanak Dev Ji's divine recitals).

At  Dhanoa, the Bawli, the spring of the Bein, had  old wall paintings

From old times, people living nearby used to take bath into its holy waters on Vaisakhi, Puranmashi, Amavasya, etc. Kali Bein is  related to common people's daily life from birth to death. Burial grounds of many villages are situated on its banks. Emotional attachment of the people to Kali Bein has produced much folk-lore. Many poets have written beautiful poems on it.

Many painters have painted themes related to it. For ex.Arpana Cour has painted in great detail Guru Nanak Dev Ji’s enlightenment related to Kali Bein.in many paintings.

At  Sultanpur Lodhi, there is old historical building of Hadira, luxury palace of Moghul kings. Thus Kali Bein had been intertwined into the life of the people of this area.